This weekend was the Ninth Avenue International Food Festival! Hosted in Hell’s Kitchen, vendors lined about 10 blocks, near the Theatre District. Alex and I went on the last day of the fest.

Here’s what we found:

Jumbo raw oysters, from Sea Breeze Fish Market, shucked right before your eyes. Oysters have been one of my favorite foods since I was a four year old, scarfing more down than any other adult at my family reunion. Till this day, my relatives always bring up that time that little-me went hog wild eating one after another.  Anyway, these oysters were huge, and especially tasty with lemon juice.

Pro tip: if you’re nervous about eating raw oysters, disguise the first one with plenty of hot sauce, cocktail sauce, horseradish– whatever topping you already know you like. Not so scary, eh? You’re on your way to being a seafood connoisseur! 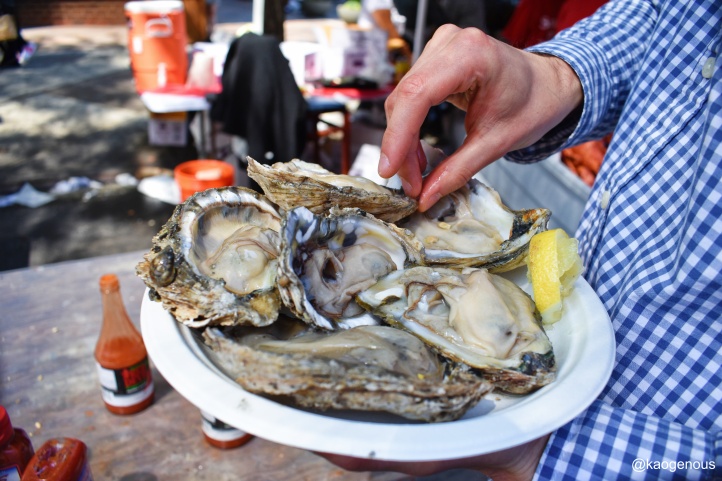 Next, we shared some hot, Italian sausage in a bun with grilled onions and bell peppers as a topping. Well, when I say shared, I mean that I got three bites before it was gone (Looking at you, Alex). But I don’t blame him, it was nearly 2 p.m. and our first meal of the day… plus, Gina’s Sausage Trailer makes delicious food. The mustard/onions/spicy sausage combo really hit the spot. We washed this down with strawberry lemonade– with actual strawberries– none of that fake stuff. It almost felt like a movie scene, with happy people and their friends eating and drinking in the sun. Where there was music, people were dancing.  Does anything sound more summery than that?

At the North end of the food festival, Turkey Hill was giving out free ice cream cups, and Nestea was handing out samples of iced tea. I think there was other free stuff, but I was stuffed (pun intended). I rejected free food, which is shocking considering how much I love to eat. On our way out, we stopped and sat at a booth with ice cold Coronas. Ordinarily, I would prefer a cocktail, but summer was calling my name, and it truly was a refreshing end to brunch.

I look forward to seeing next year’s vendors, and maybe I’ll finally find the booth with the light-bulb shaped drinks.

What are you looking for?